A Fireside Chat: “How Did We Get Here…What’s Next?”
Shuford Program in Entrepreneurship Spring 2021 Social Impact Leadership Series 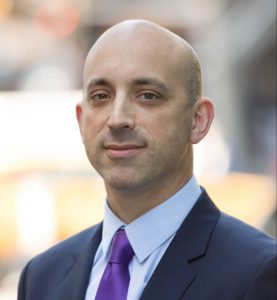 Jonathan Greenblatt is the CEO of ADL (Anti-Defamation League) and its sixth National Director. As chief executive of ADL, Jonathan leads all aspects of the world’s leading anti-hate organization. He is an accomplished entrepreneur and innovative leader with deep experience in the private, public and nonprofit sectors. Since becoming CEO in July 2015, Greenblatt has modernized ADL while refocusing it on the mission it has had since its founding in 1913: to fight the defamation of the Jewish people, and to secure justice and fair treatment to all. Under Greenblatt, ADL has worked in new and innovative ways to counter anti-Semitism from all sides and to combat extremism in all forms. In 2016, he expanded ADL’s Center on Extremism to enhance the organization’s work in monitoring and neutralizing rising threats to Jews and other marginalized groups. In 2017, he launched ADL’s Center on Technology and Society in Silicon Valley to fight the rising tide of anti-Semitism and hate in social media. He has initiated partnerships with diverse organizations including the Aspen Institute, the European Jewish Congress, Google, U.S. Conference of Mayors and Volkswagen. In 2016, he launched “Never Is Now” which has evolved into one of the largest annual convenings in the world focused on anti-Semitism.